by JOrge s. B. Guerreiro

Top gun is back

Meeting with Captain Jim DiMatteo. Piloting in the blood, an IWC on the wrist

As the sequel to the 1980s cult film hits our screens, IWC presents the Pilot's Watch Chronograph Top Gun Edition “SFTI”. Meet Captain Jim DiMatteo, the most experienced pilot in the history of the legendary American flight school.

by JOrge s. B. Guerreiro

Top gun is back

Meeting with Captain Jim DiMatteo. Piloting in the blood, an IWC on the wrist

As the sequel to the 1980s cult film hits our screens, IWC presents the Pilot's Watch Chronograph Top Gun Edition “SFTI”. Meet Captain Jim DiMatteo, the most experienced pilot in the history of the legendary American flight school. 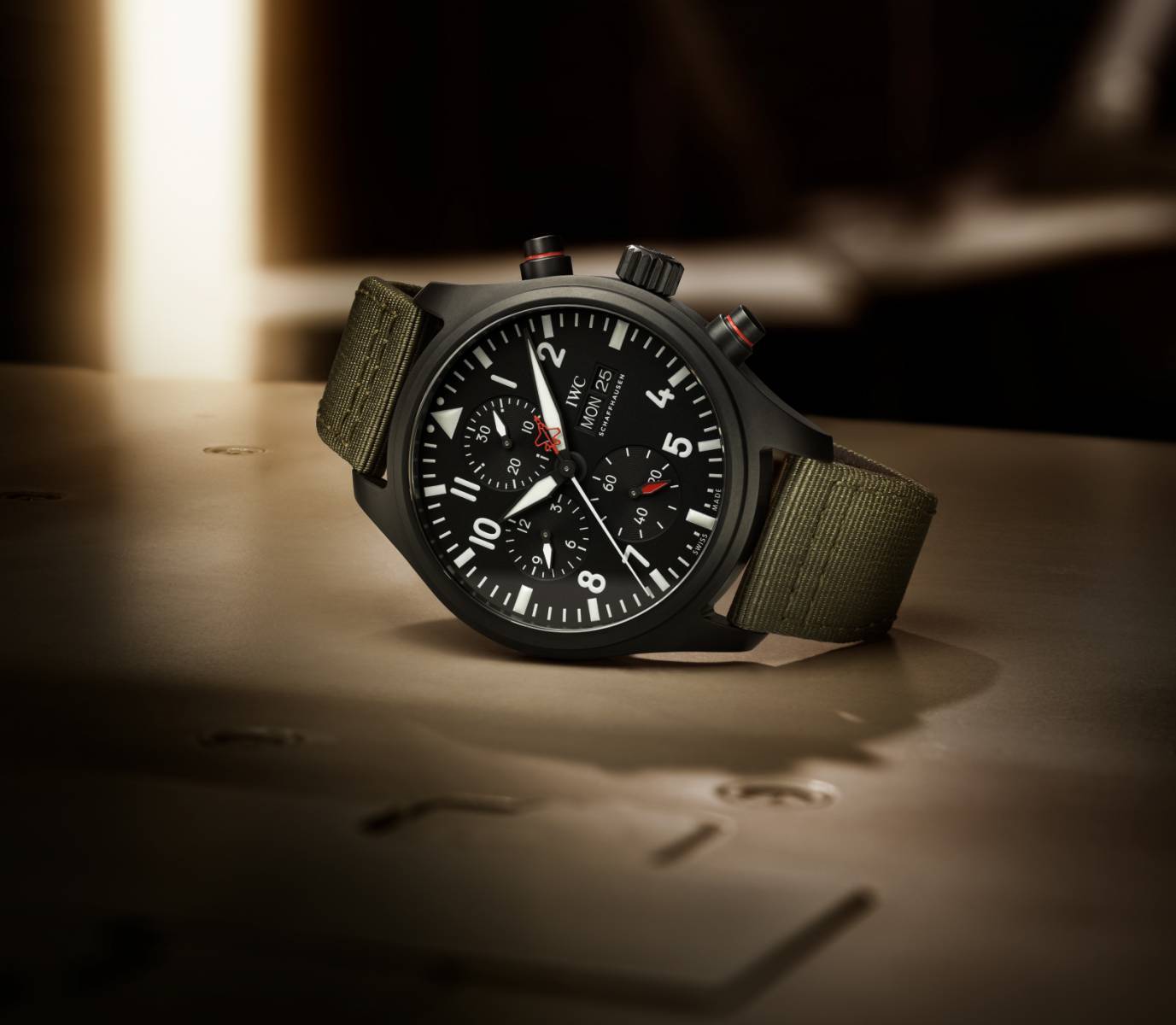 To the general public, the words Top Gun instantly conjure up images of mid-air combat, with Tom Cruise at the controls of his fighter jet. The cult film from the 1980s is actually named after the United States Navy Fighter Weapons School. It is this aviation school of America’s naval aviation elite that is nicknamed Top Gun. It is where US Navy aces develop the best in-flight military tactics. More than 30 years after this first opus, a sequel will soon light up the big screens. Maverick is back in service! In fact, Captain Jim DiMatteo participated in the film. And what a living aviation legend this DiMatteo is. “I was born into a family of aviators. One day in our home in Montana, my brother told me to keep an eye on the sky. He showed up flying his fighter jet – in hindsight, I'm sure it was illegal – and put on a mini air show for his little brother. For me, at that precise moment I said to myself, that’s exactly what I want to do.” It was the starting point of a unique career. 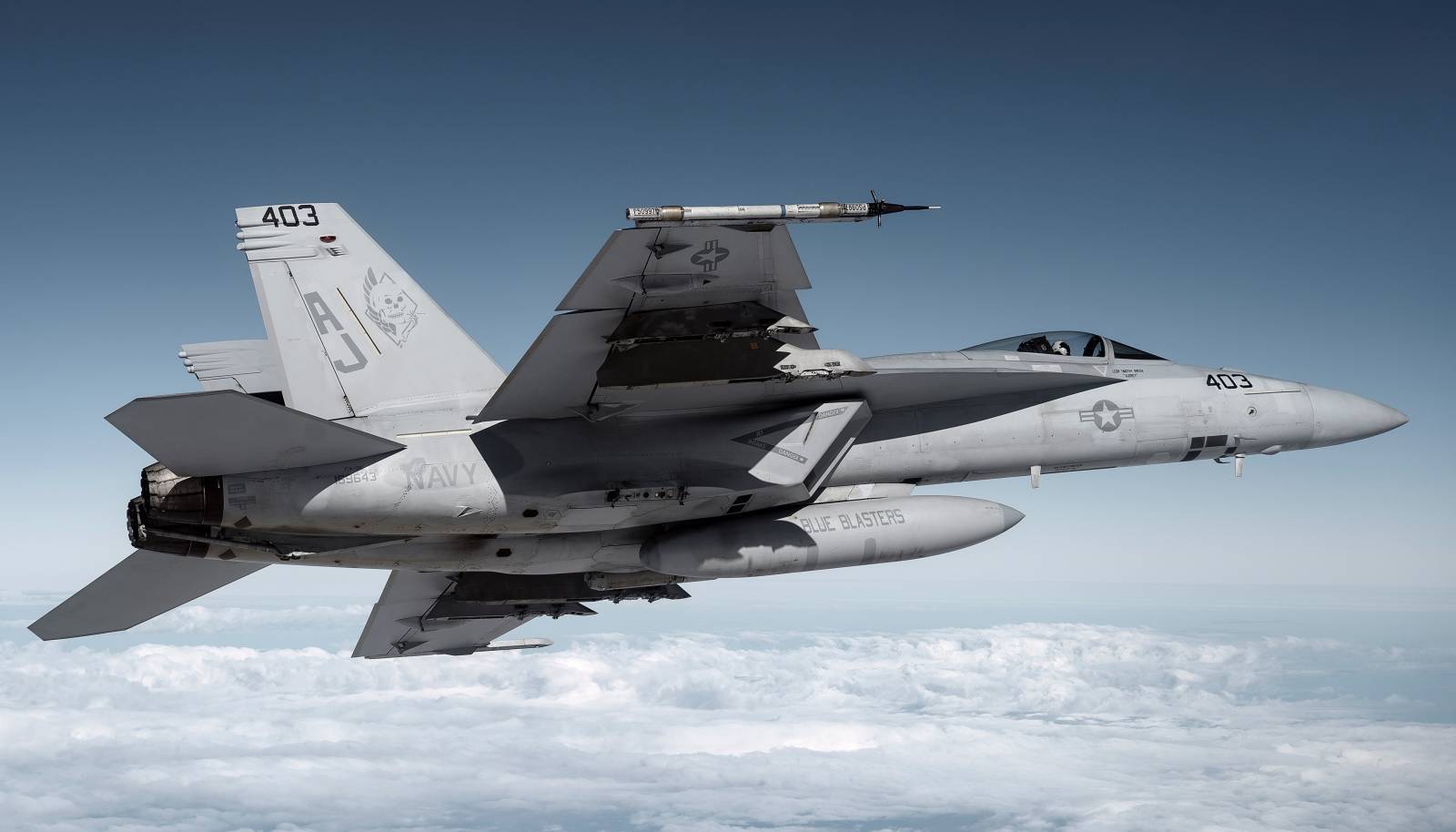 ... during very tight turns or vertical manoeuvers, the gravitational forces can cause physical pain. At 9 G, your head weighs more than 45 kg 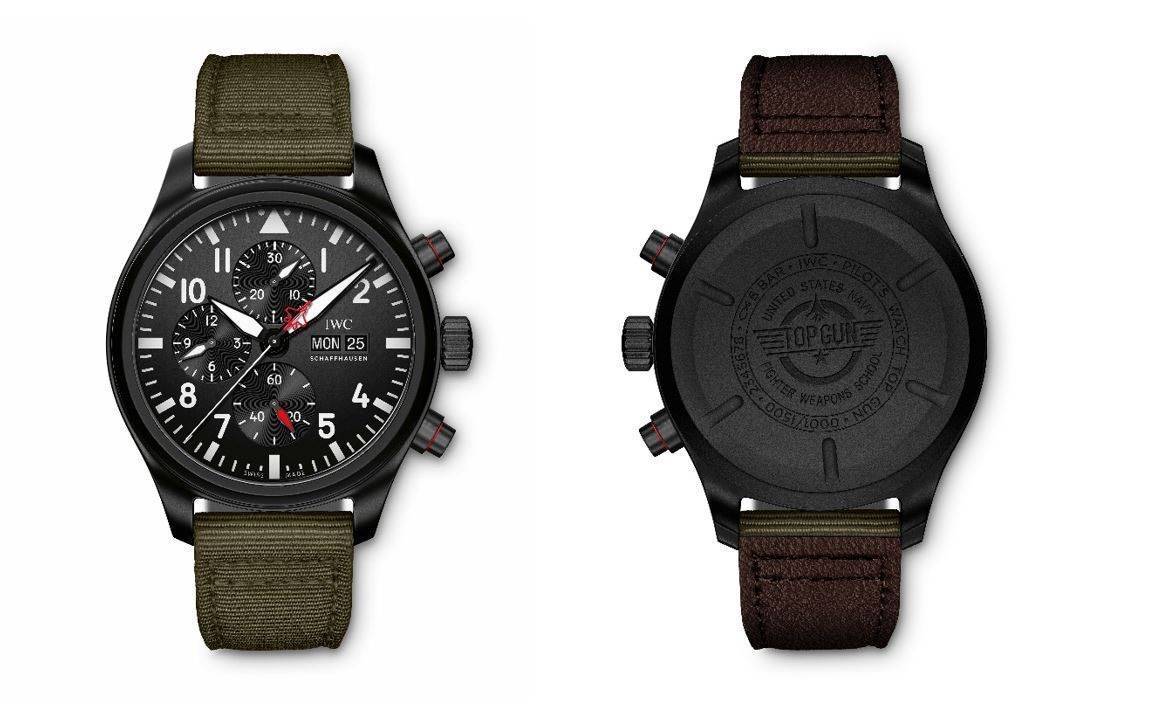 Now retired after 25 years of service, Captain Jim DiMatteo accumulated more than 5,000 flight hours in five different aircraft (F/A-18, F-16, F-14, F-5, A-4) and was deployed several times in combat, notably during Operation Desert Storm in 1990. He was recruited by the prestigious Top Gun Adversary Squadron, an force made up of the most talented pilots in the US Navy who become “the bad guys” by playing the role of the enemy in training exercises. His record of service has earned him an inductee into the Aviation Hall of Fame in recognition of his entire career. 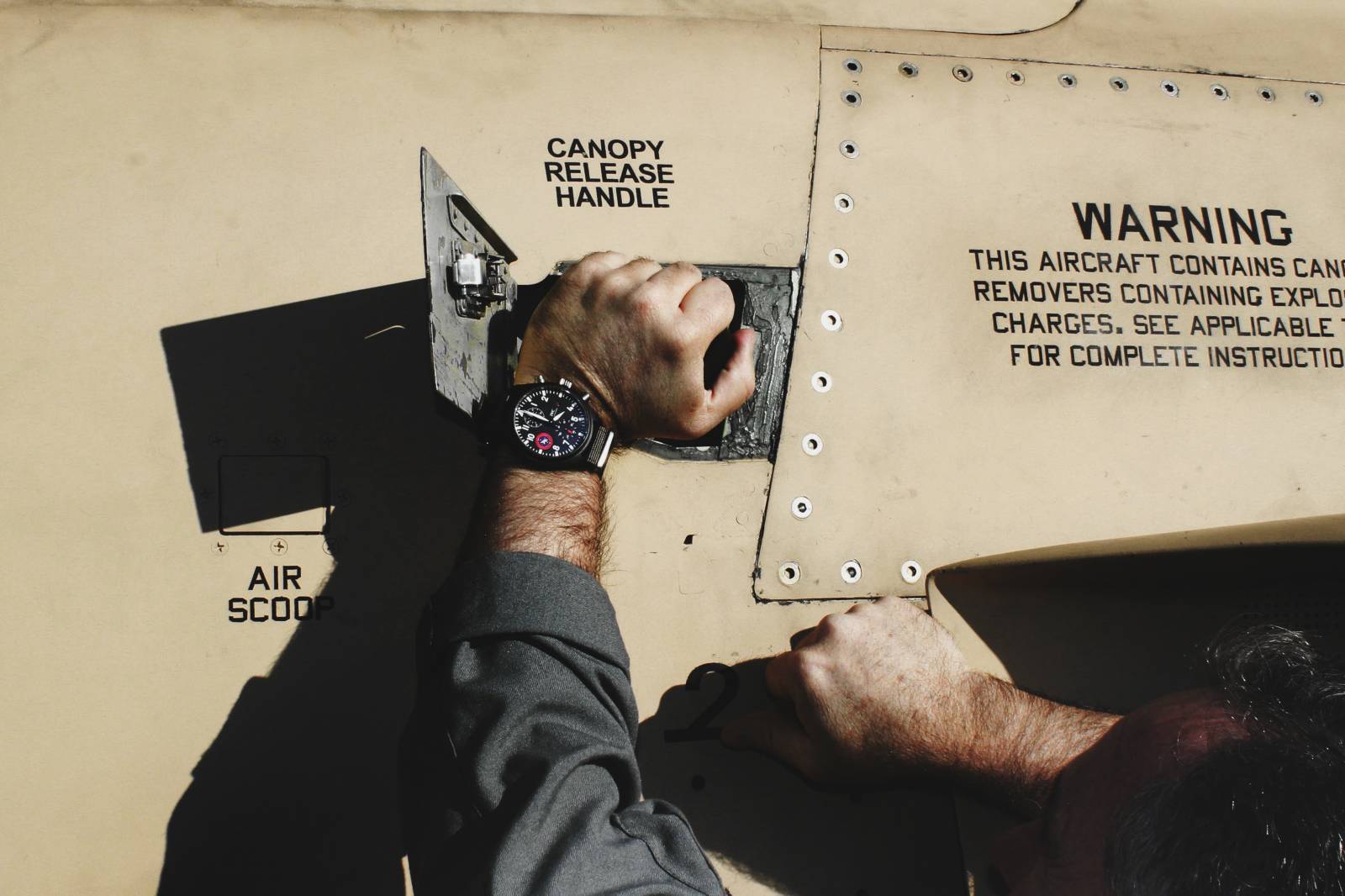 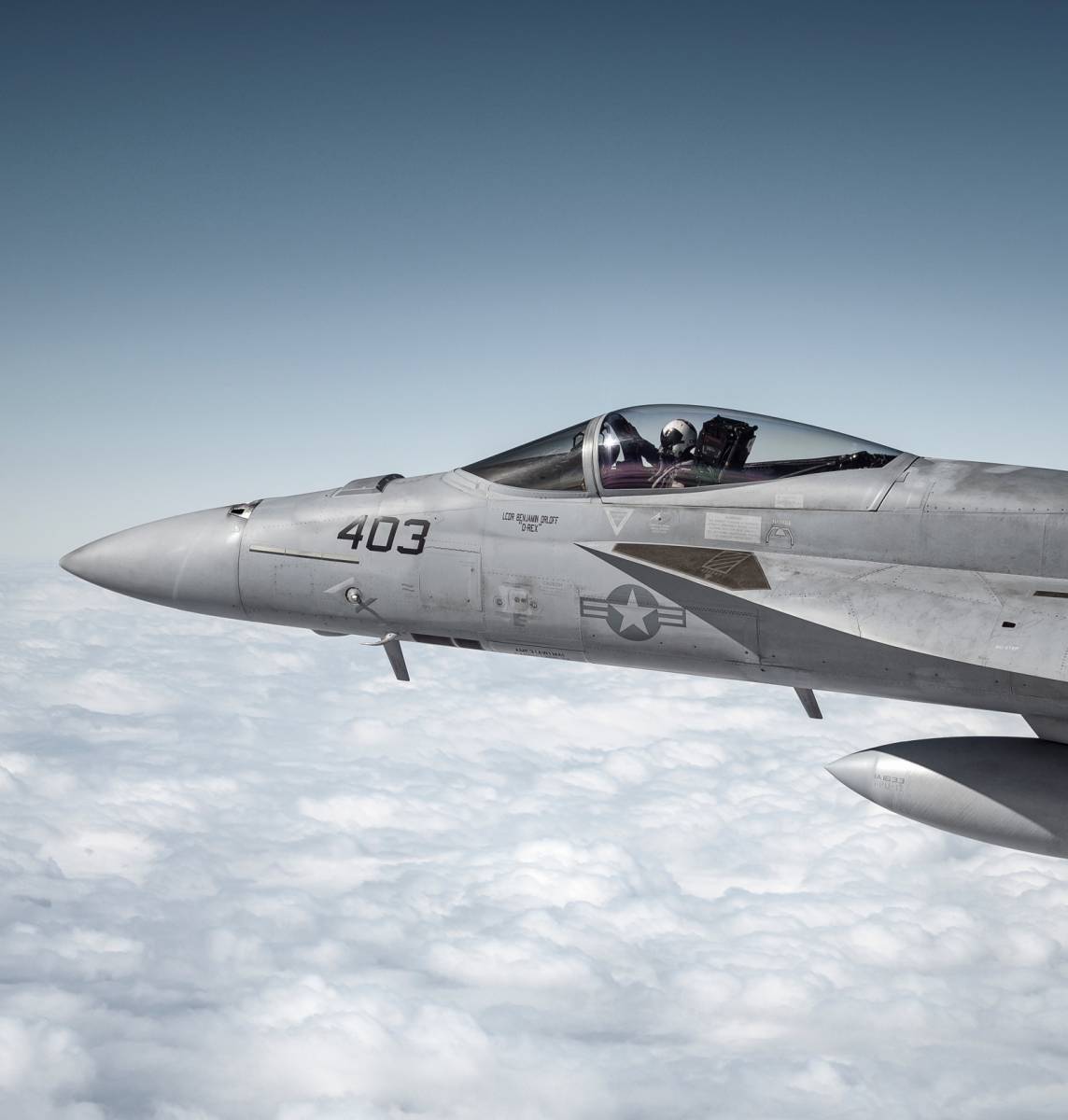 In view of this impressive curriculum, IWC chose Captain DiMatteo to be the first to wear the new Top Gun Chronograph Strike Fighter Tactics Instructor edition, a watch celebrating the 13 years of partnership between the Schaffhausen watchmaker and the Top Gun school. Limited to only 1,500 watches, this timepiece is inspired by a model from 2018 created in collaboration with the instructors of the Naval Air Station Lemoore in California. Its 44 mm-diameter case is made of Ceratanium, a ceramic compound of zirconium oxide developed by IWC. This incredibly strong material is able to withstand the extreme pressure that pilots are subjected to in their fighter jets. “During very tight turns or vertical manoeuvers, the gravitational forces can cause physical pain. At 9 G, your head weighs more than 45 kg! Imagine how you feel then. Everything inside the cockpit is hard, made of metal or glass. During manoeuvres, the watch on your wrist jolts all over the place. It has to be robust!”, according to Jim DiMatteo. 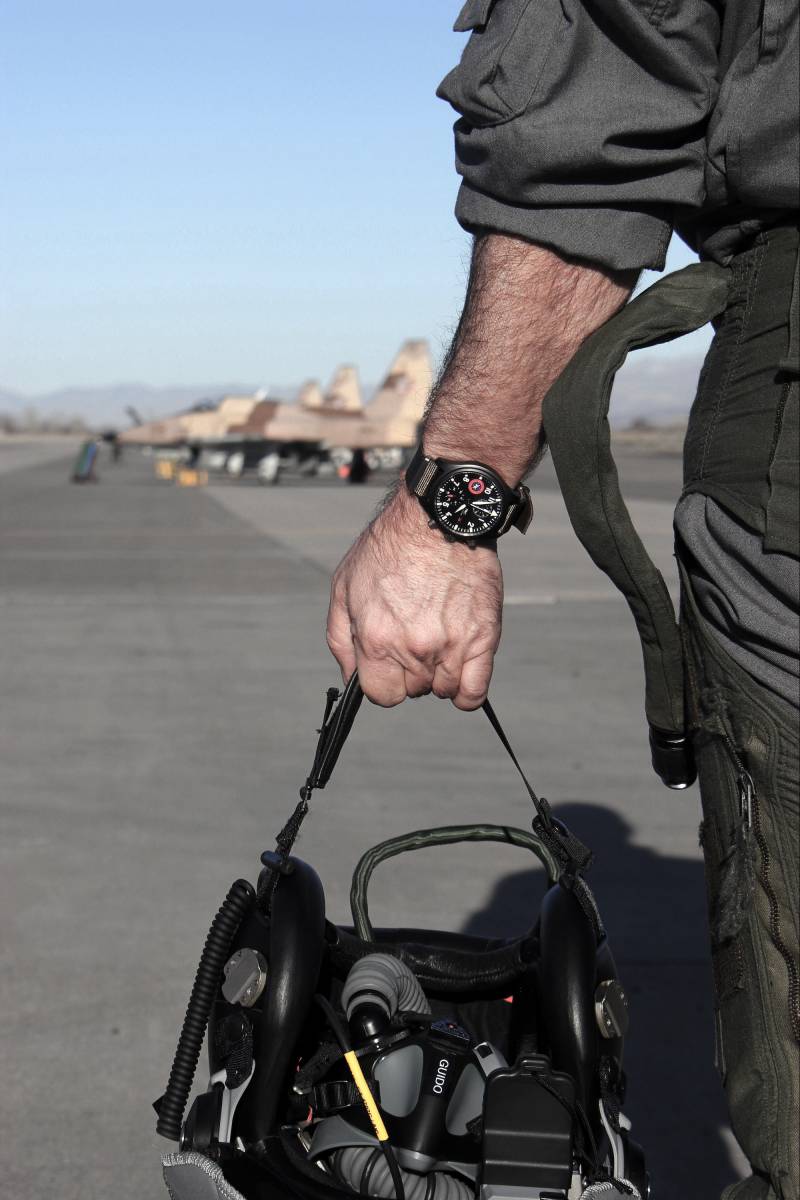 Ceratanium offers pilots another advantage – its dark matte colour makes the watch completely anti-reflective. It is fitted with the 69380 IWC-manufactured calibre, a column wheel chronograph mechanism. The second hand is located at ­­6 o'clock and the date display at 3 o'clock. The civilian model is however slightly different from the pilots’ version. “During the three months of training in the heart of Nevada's massive airspace free of civilian air traffic, you focus exclusively on improving your flight skills and tactics. There is nothing to distract you. You eat, sleep, breathe and dream Top Gun”, says Jim DiMatteo. “It was the hardest job I’ve ever done, a huge mountain to climb. When you finally graduate, you are allowed to wear the patch with the official Top Gun crest on your shoulder. This is a sense of great achievement and a source of pride for us. This badge identifies us as part of something bigger than ourselves”. This is why the Chronograph Top Gun Edition SFTI does not feature the Top Gun badge on the display, a privilege reserved only for graduates of the school. In the civilian version, it is mentioned on the back of the watch.

Despite all the state-of-the-art technology in today's fighter jets, pilots still wear their aviator watches when flying. According to Captain DiMatteo, “time is the most important thing on a mission. Everything is linked to time. When we start a briefing the first thing we do is sync our watches. Every task, from take-off to target, including the route to get there, must be timed down to the last second. Of course, our jets are equipped with the most advanced avionics systems and have built-in GPS synchronised clocks. But we use our wristwatches to coordinate our movements before getting on the plane, and to check the avionics to make sure the system is working properly. And also, let's be honest, because we pilots love to look cool!” 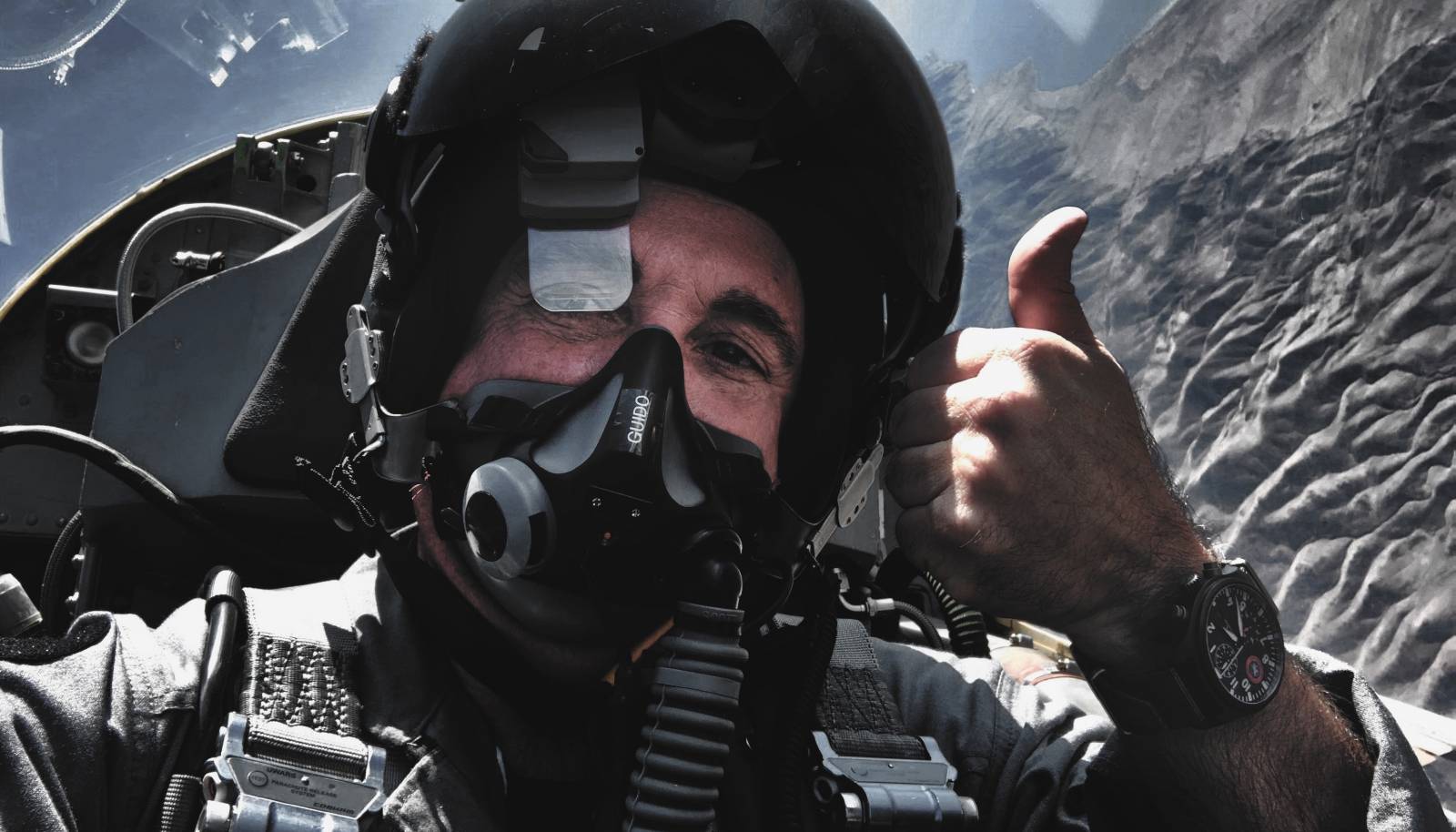